Coming from a childhood which included an almost PhD level of education from my father in all things re nature, I was floored to discover that the Weedy Sea Dragon is the Marine Faunal Emblem of Victoria, Australia. 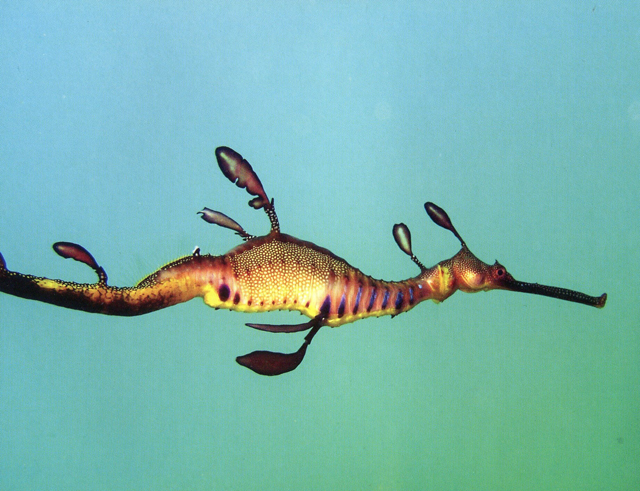 At the beginning of the Summer of 2005/06 I was invited by my talented friend from Global Art Projects, to represent the people of Victoria as part of the community arts project called the ‘Canopy of the Commonwealth’ . 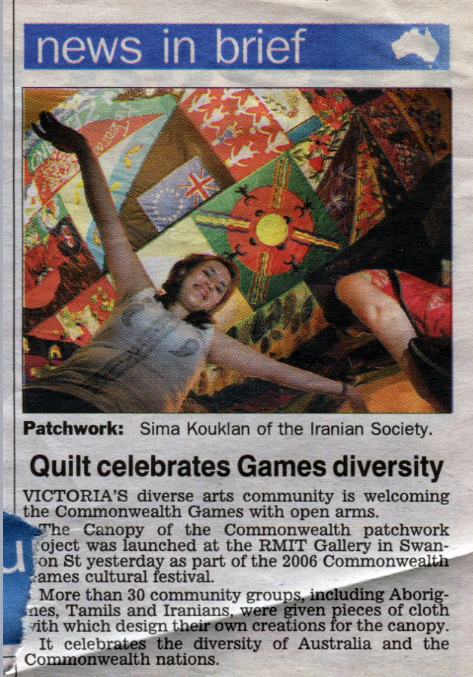 The Canopy of the Commonwealth patchwork was launched in the RMIT Gallers foyer as part of one of the most stunning traditional textile exhibitions I have ever seen, Threading the Commonwealth, curated by Global Art Projects.

I LOVE Weedy Sea Dragons, so that, coupled with the delicious green triangle I was given as the background fabric, I went to the serious business of doing Victorians proud.  My family lost me that summer to the birth of the Weedy Sea Dragons.

The first step was to draw the lovelies … It was my great friend Jenny McCarthy who suggested to ‘just chop them up’ which gave me a much broader scope to balance the triangle.

The bodies of the dragons were made from my precious Thai Silk Supply which I bought in 1984 in Thailand.  I took days to research and bargained for hours to get the price down because I was buying 50 metres… Once they agreed I proceeded to choose 50 different colours at one metre each.  They were as mad as stink with me!

Fusing helped with accuracy and ease and to give more depth I used Silk Organza as a drop shadow.  I created the shaded body using a mouth sprayer, a seriously simple tool implementing the laws of science .. just don’t suck in, what ever you do.  The fins were actually from a photographic print fabric of butterfly’s. Everything was  machine appliquéd in place … and of course they needed some sequins and seed beads for a touch of glamour.

It was a great project to be involved in and even better when I heard my kids proudly say that their mother was involved in an exhibition for the 2006 Commonwealth Games … I don’t think they knew just how teeny weeny that involvement was though and  I never corrected them. You can never have too much credibility with your kids, I might need to drag it out of the back of the bottom drawer one day.